Skip to content
Covid-19 Update: We are open for business and available to take email and telephone enquiries

What is a uterine rupture? 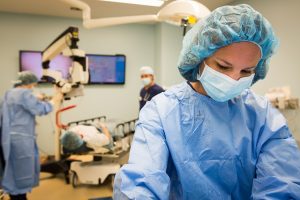 This is when a tear in the wall of the uterus (womb) occurs. This sort of tear often occurs in an area where a previous incision has been made such a procedure such as during a caesarean section.  A uterine rupture normally occurs during labour, but it can occur before labour.

When the uterus ruptures it is essential that the matter is dealt with urgently as this is a serious condition for both mother and child.

What are the symptoms of a uterine rupture?

During labour, the main indicator of a rupture occurring is an abnormality in the baby’s heart rate. This is when during labour it is essential to monitor the baby’s heart rate. The mother can also have symptoms such as abdominal pain, vaginal bleeding, a rapid pulse and other symptoms of shock such as referred pain to the chest, this is due to internal bleeding which causes irritation to the diaphragm. Further, the labour may slow down or stop.

What causes a uterine rupture?

How is a uterine rupture treated?

It is essential that the rupture is detected as quickly as possible and prompt treatment is commenced. If the rupture is connected to certain medication which had been prescribed during labour such as oxycontin then this medication should be stopped immediately. Surgery will be needed to deliver the baby via an emergency caesarean section.

How can a uterine rupture be negligent?

When a uterine rupture occurs this is a medical emergency and it is essential that this condition is recognised and dealt with immediately. If this condition is not detected and treated in a prompt manner it can lead to the mother suffering significant blood loss and organ damage. Further, the baby can also suffer brain damage and other neurological conditions caused by the lack of oxygen. In some cases, uterine rupture can cause the death of the mother and baby.

There are a number of ways in which negligence can occur with uterine ruptures such as:

This list is not exhaustive, but gives an indication as to how treatment provided to a woman may be negligent. If you have suffered a uterine rupture and are concerned that the treatment provided was substandard please contact us today for a free no obligation chat.